HomeTechReview of technologies that boost potential for carbon dioxide conversion to useful... 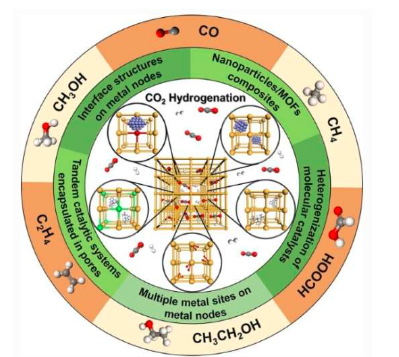 Review of technologies that boost potential for carbon dioxide conversion:

The team published their findings in Nano Research.

First, they suggest that more extensive design and precise synthesis are needed to build the interface structures in the metal-organic frameworks. Next, the researchers suggest that carbon dioxide conversion at low temperatures can be enhanced by introducing functional sites within the organometallic frameworks to aid in carbon dioxide activation. Their third recommendation is that deeper design of catalytic sites within organometallic frameworks is needed to reduce the dependence of target product selectivity on intrinsic properties of metals. Their final recommendation is to develop high-pressure in-situ characterization technologies, such as high-pressure in-situ X-ray absorption spectroscopy, X-ray diffraction analysis, and Raman spectroscopy, to characterize the dynamic structural change of organometallic frameworks. based on catalysts during carbon. hydrogenation of carbon dioxide at high pressure.

“We hope that our discussion on catalysts based on metal-organic structures for the selective hydrogenation of carbon dioxide can provide some ideas to develop the catalysts enabled to achieve high activity, excellent selectivity and good stability. We believe that catalysts based on in metal-organic structures have the great development prospects and application potential in carbon dioxide hydrogenation under mild conditions in the future,” said Guodong Li, a professor with the National Center for Nanoscience and Technology.