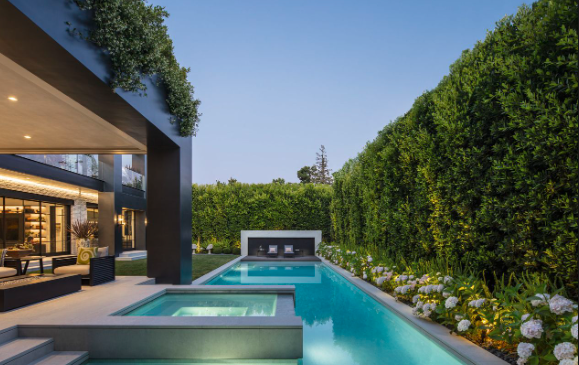 The “megamansion king” sold his own Los Angeles megamansion for $19.5 million, according to Compass, which handled the deal.

Last week’s sale of the six-bedroom, eight-bathroom residence is a record for Los Angeles’ leafy Brentwood neighborhood, according to listing agents Morgan Trent and Aaron Kirman of the Aaron Kirman Group at Compass. The home was sold in an off-market deal and Mansion Global was unable to independently confirm details of the sale, including the identity of the buyer.

“As much as I’d love to take credit for setting a record, Richard did all the hard work,” Trent said, adding that serious buyers were able to tour the house with the architect. “Even during the final run, Richard was pointing out things that he didn’t even know were there.”

Since founding the Landry Design Group in 1987, Mr. Landry, 65, has directed the design of mega-mansions for a long list of celebrities including Sylvester Stallone, Mark Wahlberg, Dr. Dre, Sugar Ray Leonard and Tom Brady and Gisele Bundchen.

“There are very few times that we get to see such a well-known architect design a project for himself,” Trent said. “The detail throughout is unlike anything I’ve ever seen. Part of that is because [Mr. Landry] works on a different wavelength, but also because money was not an impediment.

The architect included a number of features that he suggested to clients over the years, the agent added. For example, the master bedroom suite has a shower and tub area, complete with retractable glass doors, just below a rooftop garden.

“He had this idea to wake up, take a shower and then go upstairs and have an orange,” Trent said. The suite also has a private terrace with a fire pit.

The house has no hallways, giving it an open, airy layout, and there’s a “huge skylight” above a double-height foyer. “It’s really beautiful to walk in and see the clouds and the sky,” Mr. Trent noted.

Another highlight of the home is its lower level, which features a game room with a full-size wet bar, subway tiles on a barrel ceiling, and a wall displaying a black-and-white photograph of a railroad track. New York City Subway to give it a speakeasy feel. It leads to a home theater with leather seats and a state-of-the-art audiovisual system.

Other amenities include an eat-in kitchen with a marble island, a library with a fireplace, and a pool and spa, as shown in the photos.

Mr. Landry purchased the underlying property in 2015 for $5.1 million, according to PropertyShark records.

Previous articleChina says it may have detected signals from alien civilisations
Next articleCan you Balance on one leg? Researchers want it to be part of your regular health check