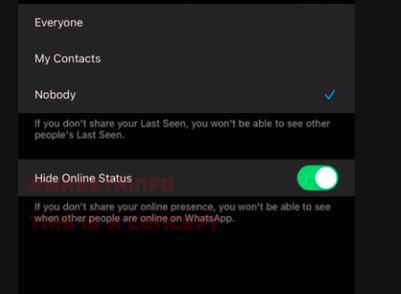 The Meta-owned messaging app WhatsApp is set to launch a new “stealth mode” that allows users to use the app without anyone noticing. The news feature will hide your “last seen” and “online” status from selected people or turn it off for everyone. The app is developing a tool that will hide your activity from other users, WABetainfo reported. WhatsApp currently allows people to hide their “Last Seen” status only.

The feature will add to WhatsApp’s range of new privacy-conscious features, such as the “disappearing messages” feature, which makes text messages you send after a selected period of time. “There can be different reasons why people want to use WhatsApp in stealth mode: for example, some users want to use WhatsApp without being bothered by other people or feel harassed by someone”.

They added that this feature is unfortunately under development, so they don’t know the details on when it will be released to the public. How to Move WhatsApp Data Between Devices and Platforms? The app beta program is a limited experimental version of the app that Android and iPhone users can sign up for. People can sign up for the Beta version of the app to get these features earlier. WhatsApp is set to launch a ‘stealth mode’ that hides your online status so you can use the app without being seen
WhatsApp is working on a new feature that will allow users to enter stealth mode
This will allow users to hide their online status while using the app.
Stealth mode will live in the privacy section in settings, directly below the feature that allows you to hide ‘Last Seen’ from other users.

Previous articleUkraine news live: Ukrainians ‘holding back’ Russian advance – as Hungary refuses to supply weapons
Next articleAMD continues to hire open source developers to stay ahead of the competition