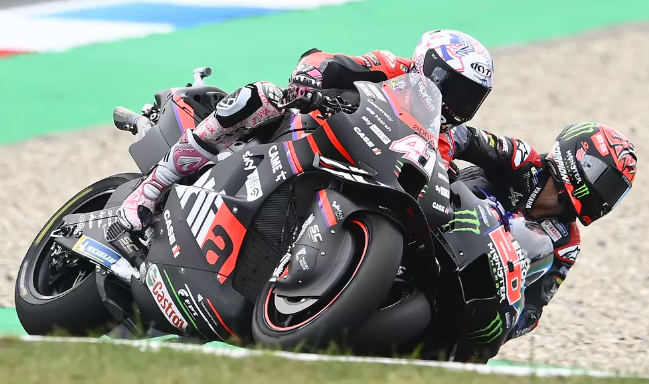 Championship leader Fabio Quartararo was furious with MotoGP stewards for giving him a long lap penalty for his clash with Aleix Espargaro at the Dutch Grand Prix.

The Yamaha rider crashed trying to overtake Aprilia’s Espargaro on lap five of Sunday’s Assen race and collided with the Spaniard.

The contact forced Espargaró into the gravel and dropped him from second to 15th, with the Aprilia rider losing 8.5sec trying to recover before finishing fourth.

The incident was placed under investigation by the stewards and resulted in a long lap penalty for August’s British Grand Prix.

It was a penalty that was widely condemned on social media, and Quartararo took to Instagram to vent his frustrations, pointing to the inconsistency shown by the stewards this season.

“Well…a long lap for the next race,” Quartararo began.

“Now you can’t try to overtake because they think you’re too ambitious.

“Since the beginning of the year, some drivers had a ‘race incident’, but apparently mine was too dangerous.

“Congratulations to the stewards for the incredible job they are doing.

“Next time I won’t try any overtaking to think about not taking a penalty.”

Yamaha boss Massimo Meregalli feels Quartararo’s penalty is harsh, adding: “We started the race hoping we could put in a good performance.

“Anyway, we were well prepared for this race, but this is a race.

“We see Fabio’s first crash as a racing incident and we feel Race Direction’s decision to penalize him for the next race is not only harsh considering he didn’t bring anyone down with it and Aleix still scored points, but it’s also not consistent with race incidents that we have seen in previous GPs that went unpunished.

“We will use this break to digest this GP and come back ready to fight at Silverstone in a month.”

This latest penalty has reignited the debate over consistency in punishments with stewards, after LCR Honda’s Takaaki Nakagami escaped without a penalty for a Turn 1 collision that ended Alex Rins and Francesco Bagnaia at Barcelona.

This was ruled a racing incident, as was his collision with Rins the previous week at Mugello, which also took the Suzuki rider out of the race.

Rins was infuriated by what he saw as the incompetence of the current stewards panel after the Nakagami Barcelona incident.

Cyclists have long expressed their frustration at the track limit penalties that have been applied in recent years.

Former World Superbike rider Chaz Davies posted on Twitter on Sunday night that the recent administration will only dissuade riders from participating on the track.

“A basic failure to recognize an unfortunate racing incident versus blatant reckless driving.”

Quartararo rejoined the Assen race after his spill at Turn 5, but would crash again on Lap 12 at the same corner due to a broken traction control sensor.

He later questioned his Yamaha team’s decision to send him out again after he initially entered the pitlane a few laps early, saying he was “lucky” not to get injured.