HomeAstronomers discover a multiplanetary system nearby

Astronomers discover a multiplanetary system nearby 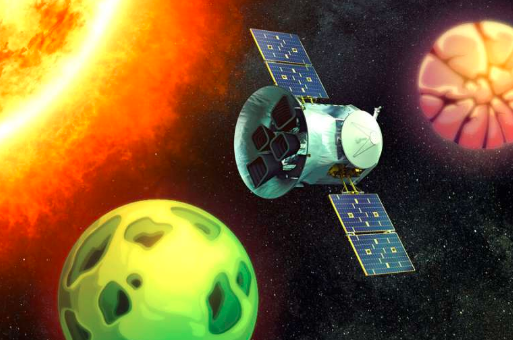 Astronomers at MIT and elsewhere have discovered a new multiplanetary system within our galactic neighborhood that lies just 10 parsecs, or about 33 light-years, from Earth, making it one of the closest multiplanetary systems to our own. .
At the heart of the system is a small, cool M dwarf star, called HD 260655, which astronomers have discovered harbors at least two Earth-sized terrestrial planets. Rocky worlds are likely not habitable, as their orbits are relatively tight, exposing the planets to temperatures that are too high to support liquid surface water.

However, scientists are excited about this system because the proximity and brightness of its star will give them a closer look at the properties of the planets and the signs of any atmospheres they may contain.

“Both planets in this system are considered among the best targets for atmospheric study due to the brightness of their star,” says Michelle Kunimoto, a postdoc at MIT’s Kavli Institute for Astrophysics and Space Research and one of the lead scientists on the discovery. “Is there a volatile-rich atmosphere around these planets? And are there signs of water or carbon-based species? These planets are fantastic testbeds for those explorations.”

The team will present their discovery today (June 15) at the American Astronomical Society meeting in Pasadena, California. Members of the MIT team include Katharine Hesse, George Ricker, Sara Seager, Avi Shporer, Roland Vanderspek, and Joel Villaseñor, along with collaborators from institutions around the world.

The new planetary system was initially identified by NASA’s Transiting Exoplanet Survey Satellite (TESS), an MIT-led mission that is designed to observe the closest and brightest stars, and detect periodic dips in light that could indicate a passing planet.

The process of classifying and subsequently confirming new planets can often take several years. For HD 260655, that process was significantly shortened with the help of archival data.

Shortly after Kunimoto identified the two potential planets around HD 260655, Shporer looked to see if the star had previously been observed by other telescopes. Luckily, HD 260655 was included in a survey of stars by the High Resolution Echelle Spectrometer (HIRES), an instrument that operates as part of the Keck Observatory in Hawaii. HIRES had been monitoring the star, along with a host of other stars, since 1998, and the researchers were able to access publicly available data from the survey.

HD 260655 was also included as part of another independent survey conducted by CARMENES, an instrument that operates as part of the Calar Alto Observatory in Spain. Since this data was private, the team contacted members of HIRES and CARMENES with the aim of combining their data power.

“These negotiations are sometimes quite delicate,” says Shporer. “Fortunately, the teams agreed to work together. This human interaction is almost as important to getting the data [as the actual observations].”

In the end, this collaborative effort quickly confirmed the presence of two planets around HD 260655 in about six months.

To confirm that the TESS signals were indeed from two orbiting planets, the researchers analyzed HIRES and CARMENES data from the star. Both surveys measure a star’s gravitational wobble, also known as its radial velocity.

“Each planet orbiting a star will have a small gravitational pull on its star,” explains Kunimoto. “What we’re looking for is any slight movement of that star that might indicate a planetary-mass object is pulling on it.”

From both sets of archival data, the researchers found statistically significant signs that the signals detected by TESS were in fact two orbiting planets.

“Then we knew we had something very exciting,” says Shporer.